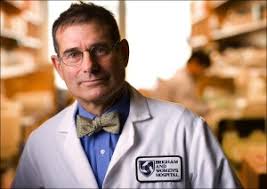 On September 29th, Thomas Stossel, one who inspired me to start Policy and Medicine, died working out at his local gym on Cape Cod. Tom was a pioneer in medical product development, gifted researcher, and always ready to stand against injustice.

Tom is a Princeton University and Harvard Medical School educated physician, trained in internal medicine at the Massachusetts General Hospital and in hematology at Boston Children’s and Peter Bent Brigham Hospitals. He was chief of hematology-oncology at the Massachusetts General Hospital from 1976-1991, head of experimental medicine at Brigham and Women’s Hospital from 1991-1998, co-director of hematology at Brigham and Women’s Hospital from 1998-2006, and co-director of translational medicine at Brigham and Women’s Hospital from 2011-2014. He has served on several scientific advisory boards and has been active in medical associations, including the American Society for Clinical Investigation and former President of American Society of Hematology. He has also been editor in chief of The Journal of Clinical Investigation and of the Current Opinion in Hematology.  Tom worked tirelessly in his translation science lab at Harvard for many years laser focused on discovering the movement of blood proteins.

Tom also had the opportunity to serve as a fellow of the Manhattan Institute and the American Enterprise Institute (AEI), defending the medical research enterprise.

Tom and his wife Kerry Maguire, DDS, MSPH, established a 501(c)3 foundation, Options for Children in Zambia, where they worked together in dental prevention and treatment in orphanages in Zambia. He also established a sickle cell disease clinical and research center in collaboration with the University of Zambia in Lusaka, Zambia.

Tom has three children: a son, Scott Stossel, the National Editor of The Atlantic magazine; his daughter Sage Stossel is a cartoonist and author/illustrator of several children’s books; and his daughter Tamara Sakala-Stossel is a graduate student at Northeastern University.  He is also survived by his younger brother television commentator John Stossel.

His Impact on Physician-Industry Relationships

In early 2008, I received an email from Tom suggesting that something needed to be done about the Jihad that was taking place in medicine to rid academic medicine of their ties with industry. He pointed to the Brennan paper, and coming reports by the Institute of Medicine (IOM), the Macy Foundation, the Association of American Medical Colleges (AAMC), and others calling for academia – and medicine in general – to rid themselves of the bonds of working with industry, akin to hippies from the 60’s freeing themselves from the social norms at the time. His concern was that by cutting the ties with industry, the attack on industry-physician relationships could cause innovation to come to a halt, or at the very least slow down to a trickle. It was his contention that the close relationship between physicians and industry had brought a golden age in medical innovation starting with vaccines, and in the 1990’s and 2000’s increasing to statins, antibiotics, and chemotherapy. He believed that the relationship had greatly increased live expectancy and decreased deaths from heart disease and cancer.

In May of that year (2008) Tom and David Shaywitz coined the term “Pharmascolds,” initially in the Weekly Standard  and then more expansively in in a Wall Street Journal Op Ed.  This phrase defined those who attempted to discredit researchers for taking “blood money” for working with industry to develop life saving therapies.

So, the two of us developed a relationship that lasted over the years. I was fortunate to assist him and several other researchers with forming the Association of Clinical Researchers and Educators (ACRE), to fight back against this Jihad that was developing. The first ACRE meeting was held in July 2009, at Harvard’s Brigham and Women’s Hospital; it was so full that people were sitting in the aisles, and the meeting was even covered in Boston Globe, Nature and New York Times.  Four weeks before the meeting, Tom informed me that he was leaving for the next three weeks to go to Zambia (his other passion) to work on a dental mission setting up clinics throughout the country and teaching dentistry with his wife, Kerry. I was a little scared with four weeks before the meeting and a lot of preparation to go, but with the help of Alan Garber, Rafael Fonseca, Lance Stell, Michael Weber, Bruce Gingles, Paul Richardson, Michael Gonzalez-Campoy and Diann Rhode we pulled it off.

Since then, Tom went on to speak and write in favor of physician-industry relationships at countless events, senate hearings and in written editorials. In 2015, he published the seminal book on physician industry relationships, Pharmaphobia. How the Conflict of Interest Myth Undermines American Medical Innovation.

Tom described how he got into the conflict of interest battle “backwards.” As a Harvard-based researcher, Tom was focused on how cells traveled throughout the body. He also authored several textbooks and wrote over 300 papers. In 1987, a small local start up named Biogen asked him to be on their scientific advisory board. Having never worked with industry or been on something like that before, he thought it would be a great challenge. On the board, he was impressed with the excellence of science they presented and their integrity, it served as a contrast to the infighting he saw in academia. Overall, Tom didn’t profit from his work with industry. A quick look at the Open Payments database (which he fought against) shows that he would only receive pittances for his involvement with them. His passion was saving lives and seeing science develop into products that could help patients.  His work was to benefit others.

In 2017, Tom left Harvard to focus full time as a scientific advisor for BioAegis Therapuetics based on his discovery of gelsolin, a blood protein being tested in community acquired and severe pneumonia.

Tom had a passion for excellence and was the guy willing to put his finger in the dyke to save the life sciences industry from self-destruction. Tom’s voice will be missed, as he was perhaps the most articulate proponent of the need for clinicians and scientists to work together to develop and disseminate information about new therapies.

Quotes from some of his colleagues

“I’ve never anyone quite like him. Tom was an amazing, multi-talented, accomplished, energetic, creative, courageous, relentlessly truth-seeking/telling, always entertaining, very funny, generous, altruistic and a loyal friend. The world is worse for his loss.” Lance Stell

“Tom fought deeply established and highly organized injustices.  He did so mostly on his own time and out of his own pocket.  He earned generous and continuous NIH grants for more than 40 years but was never awarded real money to fight the battle that few others were willing to take up.  I don’t think anyone else quite had his energy and resolve to set the record straight.  He was especially proud of his Options orphanage in Zambia and I saw parallels with his ethics campaign.  As Lance once said, Tom had remarkable and completely admirable qualities.”  Bruce Gingles

“I learned so much from Tom and greatly respected his intellect, wit and willingness to right wrongs even when collective group-think stood in the way.”  Carey Kimmelstiel

“Tom Stossel was a mensch.  He had the unique ability to be intensely courageous, intellectually sophisticated and charming. Tom was like a brother, a mentor, a role model and a friend.  Future doctors might not recognize the name Tom Stossel, but they will see his legacy in the form of medical innovation helping patients – and will not know they owe that to Tom.  He was an optimist, who fought against the ideological current and for what is right.  He was that salmon swimming upstream. While Tom received every accolade academicians could hope for, at heart, he was the honey badger!” Rafael Fonseca

“truly unique individual. His spirit will remain with us.”  Henry Black

“so smart and passionate and mischievous.” Sally Satel

Tom will be remembered by the legacy he left behind.  It can be said of him that he finished well.

COMMERCIALISM IN MEDICAL CARE, EDUCATION AND RESEARCH: CONFLICT OR HARMONY OF INTERESTS?

John Kamp Inducted into the Medical Advertising Hall of Fame

12/2010 Thomas Stossel: Money in Medicine a Sin or Salvation

02/2011 University of Miami Business Forum: The Business of Healthcare – Defining the Future

04/2011  University Medical Centers COI Policies and Innovation: Talk the Talk but Not Walk The Walk

11/2011 Thomas Stossel Addressed American College of Surgeons: Where Has All this Concern Led?

07/2012 Medical Progress is Not Easy: Complaining About it is Much Easier than Progress

01/2012 Physician Payment Sunshine: Wall Street Journal and Forbes – Where is the Evidence For Patient Benefit?

12/2013 PBS Debate: Should doctors be paid by pharmaceutical companies to promote their drugs?

06/2015 The Importance of Private Investment into Research and Development

06/2015 The Importance of Private Investment into Research and Development

04/2016 Specialty Pricing Drugs: How Did We Get Here and Where Do We Go

John Kamp Inducted into the Medical Advertising Hall of Fame