A Tough Road: Cost To Develop One New Drug Is $2.6 Billion; Approval Rate for Drugs Entering Clinical Development is Less Than 12% 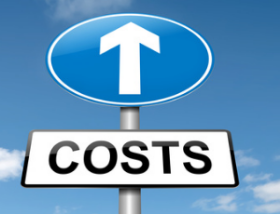 Developing a new prescription medicine that gains marketing approval is estimated to cost drugmakers $2.6 billion according to a recent study by Tufts Center for the Study of Drug Development and published in the Journal of Health Economics. This is up from $802 million in 2003—equal to approximately $1 billion in 2013 dollars, and thus a 145 percent increase in the ten year study gap. Furthermore, while the average time it takes to bring a drug through clinical trials has decreased, the rate of success has gone down by almost half, to just 12 percent.

Tufts breaks down its $2.558 billion figure per approved compound to include approximate average out-of-pocket cost of $1.4 billion and time costs (the expected returns that investors forego while a drug is in development) of $1.2 billion.

Furthermore, the estimated cost of post-approval research and development of $312 million “boosts the full product lifecycle cost per approved drug” to close to $3 billion. R&D costs include studies to test new indications, new formulations, new dosage strength and regimens, and to monitor safety and long-term side effects in patients” as required by the FDA as a condition of approval.

Tuft’s analysis was developed from information provided by 10 pharmaceutical companies on 106 randomly selected drugs that were first tested in human subjects anywhere in the world from 1995 to 2007.

“Drug development remains a costly undertaking despite ongoing efforts across the full spectrum of pharmaceutical and biotech companies to rein in growing R&D costs,” stated Joseph A. DiMasi, director of economic analysis at Tufts CSDD and principal investigator for the study. “Because the R&D process is marked by substantial technical risks, with expenditures incurred for many development projects that fail to result in a marketed product, our estimate links the costs of unsuccessful projects to those that are successful in obtaining marketing approval from regulatory authorities.”

According to DiMasi, rising drug development costs have been driven mainly by increases in out-of-pocket costs for individual drugs and higher failure rates for drugs tested in human subjects. This explanation stuck out to Don Seiffert, editor of BioFlash, who listened to DiMasi’s presentation last week:  “Based on an analysis of 1,442 experimental drugs that were in clinical tests in recent years through the end of 2013, DiMasi said the overall chance that a drug entering clinical development will be approved for marketing is just under 12 percent.”

“Approximately seven out of eight compounds that enter the clinical testing pipeline will fail in development,” DiMasi said. “Put another way, you need to put an average of 8.5 compounds in clinical development to get one approval.”

Seiffert notes that DiMasi arrived at the 12 percent figure using a “weighted average, since as of the study, just 7 percent of the 1,442 drugs had actually been approved. Fully 80 percent had been abandoned by the companies developing them, and the other 13 percent were still in active development. DiMasi said it’s likely that many of the drugs in later development will eventually earn approval, hence the overall 12 percent rate.”

The previous study set a success rate for drugs that enter human trials at 21.5 percent.

Coronavirus and the Pharmaceutical Supply Chain

After the Tufts press release, a number of consumer advocates and academics took various shots at the data. James Love of Knowledge Ecology International believes the study is “long on propaganda, and short of details.” Love urges readers to “put some pressure on Tufts to provide more details of what the data looks like.” He references the most recent industry funded study on drug costs, from 2012, entitled “The R&D Cost Of A New Medicine,” published in the Office of Health Economics (OHE). That study found R&D cost to be $1.506 billion. “[That] report was 98 pages,” he states. “So far, we have a press release of 579 words” from Tufts.

Love questions a number of aspects of the study, including the fact that the study assumes that NIH provided no funding in the pre-clinical development of drugs. Furthermore, Love states that “we don’t know how many patients were in the trials (that were used to calculate the estimate) or how much money was claimed to have been spent per patient in the trials. Since the entire estimate was based upon the costs of the trials, we don’t have any idea of what the sample looked like.”

DiMasi responded to some of these critiques in the Wall Street Journal:

[T]he “OHE analysis was based on a small sample (with regard to clinical testing) of projects that were in some phase of clinical development from 1997 to 1999 and followed only to 2002.  The data for our study are effectively much more recent than the data used for the OHE report.

“The social cost is the private cost PLUS what governments and non-profits spend that somehow contributes to the discovery and development of new drugs. If private developers spend less than they otherwise would because of the NIH research, then that is captured in our estimate because we are only measuring what private developers spent.”

Coronavirus and the Pharmaceutical Supply Chain