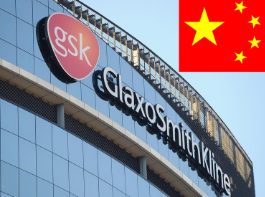 In July of last year, Chinese authorities accused GlaxoSmithKline (GSK) of using a network of travel agencies to channel around $489 million in bribes to health officials. The former head of GSK China, Mark Reilly, was also charged with corruption in June. Today, China fined the company a record 3 billion yuan ($489 million), the largest corporate fine ever in China. They also sentenced Reilly to between two and four years in jail. Reuters reports that Riley will be deported from China and will not face jail time in the country.

GSK released a press statement today about the outcomes, as well as a statement of apology to the Chinese government and its people on its website.

“The illegal activities of GSKCI are a clear breach of GSK plc’s governance and compliance procedures; and are wholly contrary to the values and standards we expect from our employees. It is deeply disappointing that these issues were not identified and addressed. GSK plc has reflected deeply and learned from its mistakes, has taken steps to comprehensively rectify the issues identified at the operations of GSKCI, and must work hard to regain the trust of the Chinese people.”

The company also promised to “take tangible actions to establish itself as a model for reform in China’s healthcare industry: by continuing to invest in China and supporting China’s scientific development; and by further development of innovative new medicines and vaccines for diseases prevalent in China.” GSK will “also increase access to its products in both city and rural areas of China through greater expansion of production and through price flexibility.”

“Reaching a conclusion in the investigation of our Chinese business is important, but this has been a deeply disappointing matter for GSK. We have and will continue to learn from this. GSK has been in China for close to a hundred years and we remain fully committed to the country and its people. We will continue to expand access to innovative medicines and vaccines to improve their health and well-being. We will also continue to invest directly in the country to support the government’s health care reform agenda and long-term plans for economic growth.”

UK news source, the Telegraph, reports that a Chinese publication asked: “Which country’s justice system can tolerate this kind of behaviour when GSK bribes people, sabotages public interest and damages the market?” The article added that “as long as GSK can learn its lesson and run its business according to law, it will gain the trust back and the support of the Chinese government”.

Virtually all of the big drug-makers in China have come under scrutiny from police or regulators. “Last year authorities visited Novartis AG of Switzerland, Britain’s AstraZeneca Plc, Sanofi SA of France, U.S. firm Eli Lilly & Co, Germany’s Bayer AG and Danish drugmaker Novo Nordisk A/S,” Reuters reported earlier this year. Executives at these companies are understandably concerned that they could be targeted personally.

The bribery allegations have potentially spurred GSK to take unprecedented steps in changing their pharmaceutical marketing practices. The company announced they will abandon individual prescription sales targets and will stop paying healthcare professionals for speaking engagements. The company is also looking to have the new compensation system in place in all of countries GSK operates by “early 2015.”

GSK also stated in their press release that they are committed to “significantly reducing and changing engagement activities with healthcare professionals; and expanding processes for review and monitoring of invoicing and payments.”

GSK also faces investigations into its overseas practices by U.S. and British authorities. Those investigations continue and could result in further penalties for the group. Because doctors are civil servants in China–technically, ‘government officials’–kickbacks to physicians could easily run afoul of the Foreign Corrupt Practices Act.

Not to be outdone by their neighbor to the South, Canada announces new regulations to…